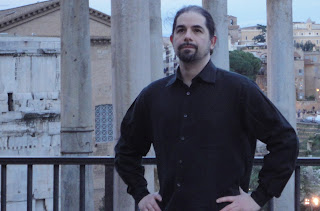 S. Craig Zahler
Florida-born New Yorker S. Craig Zahler worked for many years as a cinematographer and a catering chef, while playing heavy metal and creating some strange theater pieces. His debut western novel, A Congregation of Jackals was nominated for both the Peacemaker and the Spur awards, and his western screenplay, The Brigands of Rattleborge, garnered him a three-picture deal at Warner Brothers, topped the prestigious Black List and is now moving forward with Park Chan Wook (Old Boy) attached to direct, while Michael Mann (Heat & Collateral) develops his nasty crime script, The Big Stone Grid at Sony Pictures. In 2011, a horror movie that he wrote in college called, Asylum Blackout (aka The Incident) was made and picked up by IFC Films after a couple of people fainted at its Toronto premiere.

A drummer, lyricist and songwriter, Zahler continues to make music, and is now finishing his third album of doomy epic metal with his band Realmbuilder, which signed to I Hate Records of Sweden, after his foray in black metal with the project Charnel Valley (whose two albums were released by Paragon Records). He is also navigating preproduction on his directorial debut—a horror western that he wrote called, Bone Tomahawk, which will star Kurt Russell, Peter Sarsgaard, Jennifer Carpenter, Richard Jenkins and Timothy Olyphant.

Zahler studies kung-fu and is a longtime fan of animation (hand drawn and stop-motion), heavy metal (all types), soul music, genre books (especially, horror, crime and hard sci-fi), old movies, obese cats and asymmetrical robots. He is absolutely thrilled that Raw Dog Screaming is going to publish his new novel,Wraiths of the Broken Land, which is the most horrific piece he has ever written. The Science Fiction imprint of RDSP, Dog Star Books, will publish his transhumanism novel, Corpus Chrome, Inc., in January 2014.