One hundred years ago, the vampire Victory retired from a centuries-long mercenary career. She settled in Limani, the independent city-state acting as a neutral zone between the British and Roman colonies on the New Continent.

J.L. Gribble joins us today to talk about writing.

What or who made you want to be a writer?

The “official” answer: My dad is also a writer, with two published military fiction books and a couple of screenplays floating around. One of these days I’m going to finish up the urban fantasy I know he has languishing on a hard drive somewhere. But we’re all friends here, so I’ll let you in on a little secret: When I was 11 years old, I spontaneously invented fanfiction and had fun inserting myself into my favorite television shows. Fast forward 2 years, and I discovered that a whole lot of other people were doing something very similar on the Internet. I continued to dabble in fanfiction for the rest of middle and high school, but I also started working on my own original stories inspired by the amazing worlds already out there. And thus started my descent into speculative fiction.

Incredibly inconsistent. I already have a day job, and I don’t need or want another. So I set goals for myself, but unless I have an external deadline, I don’t feel guilty if I totally blow them. While STEEL VICTORY was a project 10 years in the making, I proved to myself that I could write a full-length novel within a year in 2014 when I wrote the sequel (a combination of National Novel Writing Month [NaNoWriMo] and smaller word-count goals through the rest of the fall and winter months). I’m on track do that again this year with book 3, with another combination of NaNoWriMo and the surrounding months.

In terms of location, I work best when I’m not around the Internet. This can mean anything from hauling the laptop to my favorite independent coffee shop with no wifi to typing away on my Kindle Fire on the couch in the den during baseball games.

How much research do you do for each book?

One of my biggest pet peeves is coming across long, detailed passages in books where the author basically says “The research I did: Let me show you it!” So I will read books about the area/time period I’m writing in and specifically not take notes in order to get a feel for the world or atmosphere I’m diving into. During the writing itself, I make notes to myself about certain specific things I will need to look up later. For STEEL VICTORY, this involved research into cargo shipping by river and various weaponry. Most visitors to my home office were kind enough not to ask why I had printouts of random river boats and container ships hanging above my desk.

Do you ever get stuck in your writing, and if so, how do you overcome it?

I am definitely a “plotter” rather than a “pantser,” which means I have the general events and conflicts of each scene outlined before I start writing a word of the book itself. On the other hand, I really need to start instituting this policy for short fiction. I get stuck there a lot because I am not as comfortable with the constraints. Usually, I put the project away and do something completely different that doesn’t involve a computer. Depending on the time of day, that can involve going to the gym, reading a book, or just hanging out with my cats. Later, usually while driving or in the shower, everything in my brain untangles and I figure out where I need to go.

Describe your favorite place to write.

I bounced around between my local Starbucks and some other chain-store cafes near my house, but nothing was ever comfortable. Awkward table set ups, too loud, too cold, etc. A little less than 6 months ago, a friend who has lived in the area much longer than me pointed me toward a small independent coffee shop called Bean Hollow in Historic Ellicott City and showed me the best (easiest) parking, which had been my major deterrent from hanging out in “Historic” previously. Its super cliché to be writing in a coffee shop, but I adore it. I’m a supporter of small/local business where possible, and the coffee is amazing. It’s incredibly busy on the weekends and they ask that people not take up tables with work then, but it’s a perfect place to have a sandwich and a latte during weekday evenings after sitting in an office all day.

How do you balance writing with real life?

Sometimes I do get frustrated if I’m on a writing roll and I have other commitments for the evening that can’t be avoided. However, not being the sort of writer who feels that she “must” hit a certain word count per day/week/month reduces a lot of the constant stress I think I would otherwise be under.

My husband also has his own hobbies, such as sports and video games, that afford me a lot of time to focus on my writing. But one of the awesome things about his hobbies and my writing style is that we can still get “together” time if, for example, he is on the couch playing Destiny with his headphones on to chat with other players and I am right next to him typing away on the laptop with Pandora playing on my own headphones.

(Don’t ask me how writers with kids do it. They are the real heroes.)

Who is your literary hero or heroine?

Sauscony Valdoria, one of the major protagonists in Catherine Asaro’s Skolian Empire series. She is a fierce, intelligent space fighter pilot who also happens to be a wife and mother. Neither of the latter traits in any way diminishes her capacity to be a completely badass warrior. She is easily part of the inspiration for my own protagonists as well as an inspiration in my own life.

If you were stuck on a deserted island with three books, which ones would they be?

If you could hang out with one author, living or dead, for an entire day, who would it be and what would you do?

Oscar Wilde. We would enjoy a leisurely brunch and chat about life and writing over mimosas, spend a quiet afternoon writing and bouncing ideas off of each other, and then spend the evening partying like mad. This plan can easily be executed in either his time period or my own!

Do you have any advice for beginning writers?


Your only competition is yourself. At the same time, it’s not really a competition at all. Have faith in yourself and stay true to yourself in both your writing and during forays into the crazy publishing world. Everything is changing so quickly these days, so remember that there are very few hard and fast right or wrong answers. Listen to all the advice you can, but always do what feels right for you.

STEEL VICTORY releases June 26th and is available for pre-order. 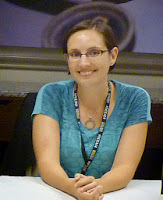 She lives in Ellicott City, Maryland, with her husband and three vocal Siamese cats. Find her online (www.jlgribble.com), on Facebook (www.facebook.com/jlgribblewriter), and on Twitter and Instagram (@hannaedits). She is currently working on more tales set in the world of Limani.
Posted by C.G. at 12:48 PM