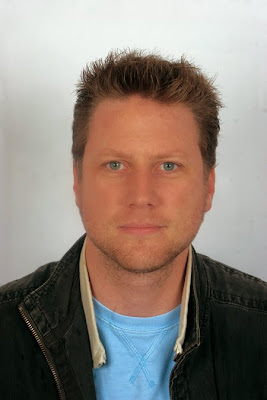 Bradley Sharp
Bradley Sharp was born in 1977 in Oxfordshire, UK. From a young age he filled many sketch books, so it only made sense to study Graphic Communication at Nene University, where he received a BA Honors degree in 1997.

But the real world called Sharp away from academics, so he traveled around the globe a couple of times, working as a graphic designer. Now he makes a living by designing magazine spreads, but freelances with vector illustrations, allowing him to create something far-removed from what he does in his nine-to-five job.

Sharp finds vector to be an easy tool and believes anyone can use it. "I'd say my artwork is nothing more than glorified doodling. I like the logical inconsistencies of surrealism and find inspiration from many places such as music or the science fiction genre. Dog Star's novels lend themselves well to my style. I look forward to working with DSB in the future, and hope fans will like the imagery as much as they enjoy the words." Find Sharp's work online at http://www.bradsharp.co.uk. 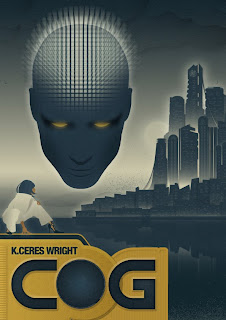 The main element of the COG illustration is the omniscient head. Its domineering presence symbolizes the uploading and downloading of personalities. The square shards of light beaming from the head depict the transferring of this data with a holographic look.

The looming city represents corporate power, with the family's hologram company building in Arlington, VA, being the most prominent. Below this section is the area of Bowie Town Center. I've given these shops and apartments a crooked and disheveled look to show its run-down state.

K. Ceres Wright's main character, Nicholle Ryder, looks over the city cautiously from the left. Her blue hair is reflected across the design with complementary elements of gold and cream. 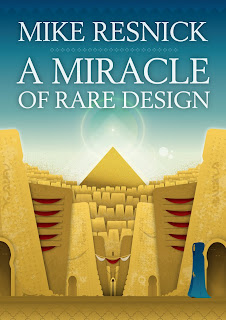 After reading A Miracle of Rare Design, with its collection of alien worlds, it was the setting of Medina which stayed with me. With the pyramid being an important focus for the initial Medina story, I felt it needed to be featured as a place the main character, (Lennox) is discreetly trying to reach. The buildings of the city are described as being windowless, angular and made of mud. So with all of this in mind I have designed a symmetrical illustration looking down a street with the pyramid in the distance.

At a glance I wanted it to appear as if it could be set in North Africa, but at a closer look there was something alien about it. Large hanks are described hanging out to dry, so I wanted this to be done in a different way. The book also mentions strange religious symbols, which I felt would be another intriguing element to include on the cover, indicating again that this is another world.

As the main character ultimately loses his visual identity, I have represented him being mostly obscured by his robe.

I felt the cover also needed another element. So blocking the route to the pyramid is Chomanche, the high priest and quite an important character to the story. I hope people feel the illustration captures the heart of the book and enjoy this fast paced page-turner as I did.