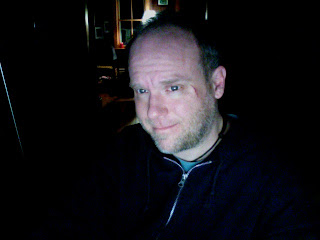 Scott Christian Carr has been a radio talk show host, editor of a flying saucer magazine, fishmonger, spelunker, psychonaut, journalist, medical/pharmaceutical writer, TV producer, and author. He is a Bram Stoker Award nominee, Scriptapalooza 1st Place Winner for Best Original TV Pilot, and in 1999, he was awarded The Hunter S. Thompson Award for Outstanding Journalism. Scott is a contributing editor and columnist for Shroud Magazine, and a 2010 Choate Road “Spotlight Scribe” - But his most satisfying and rewarding job is that of “Dad.” He lives in a home once owned by George Hansburg (inventor of the pogo stick) on a secluded mountaintop in New York’s Hudson Valley with his two children.

Scott Christian Carr’s latest novel Hiram Grange & the Twelve Little Hitlers is currently available from Shroud Publishing, Amazon.com, and at Barnes & Noble near you. Lloyd Kaufman (President of Troma Entertainment and Creator of the Toxic Avenger) calls it, “More fun than a barrel full of Hitlers... The best novel since Don Quixote!” His upcoming novels Hiram Grange & the Twelve Steps and Matthew's Memories (illustrated by Danny Evarts) are scheduled to be released in 2013.

Scott’s first novel, Champion Mountain, was recently selected for distribution on Amazon’s Kindle digital bookreader. His other publications include the anthologies Sick: An Anthology of Illness (which features an excerpt from his novel Believer), Death Be Not Proud, Desolate Places, Beneath the Surface, Demonology: Grammaticus Demonium, Scary! Holiday Tales to Make You Scream, and the upcoming Terror at Miskatonic Falls. Scott’s fiction has appeared in dozens of magazines and publications, including Shroud Magazine, The Dream People, GUD, Pulp Eternity, Horror Quarterly, The MUFON Journal, Weird N.J. and Withersin. His novella A Helmet Full of Hair was recently translated and reprinted in the prestigious French quarterly, Galaxies: La Revue de Référence de la Science Fiction.

Carr is an award-winning writer and producer of film/television. He is the Sr. Writer/Co-Creator of The Learning Channel (TLC) television series Dead Tenants. As Head of Development for both the Emmy Award-winning Triple Threat Television and the Academy Award-nominated Fredric Golding Productions Scott developed original programming for MSNBC, ESPN, CNBC, A&E, The Hallmark Channel, Discovery Networks and The Learning Channel.

Scott is the creator and executive producer of the post-apocalypse scifi film The NUKE Brothers (featured at DragonCon the World's Largest Scifi & Fantasy Film Festival and the 2012 AnthoCon Speculative Art & Fiction Conference) and writer of the tie-in comic book The Continuing Adventures of Fat Man and Little Boy...

He is currently pushing his latest novels Believer and The First Time We Died out into the world, and diving into his next: [PAUSE] and his first historical novel Woodstock, Baby…!, as well as adapting for the stage his unpublished novel The Apocalypse Will Be Televised: A Reality Television Tragedy. He is also hard at work on his nonfiction memoir of the worst divorce in the history of the planet, Congratulations, I'm Sorry, Good Luck...! (the book won’t be finished until the real life story is).

He writes every day.

Wasteland Blues (co-written with Andrew Conry-Murray) is Scott's first novel with Dog Star Books. It will be released in late 2013.

Posted by Heidi Ruby Miller at 7:35 AM