The first issue is online at http://www.galaxysedge.com. Below is the table of contents: 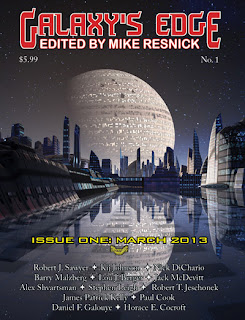 The Editor's Word, by Mike Resnick

FICTION
The Shoulders of Giants, by Robert J. Sawyer
Schrödinger’s Cathouse, by Kij Johnson
Creator of the Cosmos Job Interview Today, by Nick DiChario
Just a Second, by Lou J. Berger
Act of God, by Jack McDevitt
Requiem for a Druid, by Alex Shvartsman
The Bright Seas of Venus, by Stephen Leigh
The Spinach Can's Son, by Robert T. Jeschonek
Think Like a Dinosaur, by James Patrick Kelly

COLUMNS
From the Heart's Basement, by Barry N. Malzberg
Something Different, by Horace Cocroft
Book Reviews, by Paul Cook
Posted by Heidi Ruby Miller at 5:42 AM