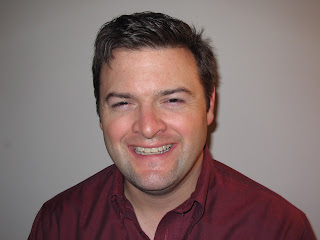 Matt Betts
Matt Betts was born and raised in Lima, OH and went to college in Toledo. He currently lives in Columbus with his wife Mackenzie, and their two wonderful boys. Growing up, Matt consumed vast amounts of pop culture. He read comics, watched cartoons, listened to various popular music, regularly viewed the old monster movies on weekend television and read everything he could find.

Matt went to college to study communications, specializing in broadcasting. He signed on with the campus radio station as a news anchor and reporter not long after he arrived at college – before he took his first communications class, in fact. After graduation, he worked for a number of radio stations as a DJ, a reporter and anchor. More than any other format, Matt worked at Oldies stations, which fed his love of Elvis, the Beatles and other great early rock icons.

Further feeding his love affair with pop culture, Matt also worked as a waiter in a Toledo comedy club while attending college. This allowed him to see how famous comics built and fine-tuned their acts. For comedians, like authors, the ending of a story is just as important as the beginning and vice versa. If a comic couldn’t sell the setup, the audience most likely wouldn’t stay with them for punch line. Over the course of a week, it was possible to see a comedian transform a decent joke into a better one through slightly different wording or different delivery.

Matt met and interviewed comedian and actor Larry Miller one night at the club. Larry gave some advice that stuck with Matt long after. Larry was a classically trained musician who still played regularly and when asked if it was all too much, Larry suggested that creativity is creativity. You don’t have to do just one thing. Whether you’re writing a poem or a script, that creativity feeds the other things you do. It helps you be a better actor, musician, etc. It is advice Matt has applied to his writing career from the beginning, allowing his love of pop culture to infuse and inform all of his work, including poetry, short fiction and his longer works.

Matt’s short and flash fiction has focused a lot on humor and horror. His work appears in Arkham Tales, Ethereal Tales, the Triangulation: Taking Flight anthology, Bizarro Fiction! The Journal of Experimental Fiction 37, A Thousand Faces and Cinema Spec: Tales of Hollywood and Fantasy.

Matt’s poetry has been published in numerous venues, and his poem “Godzilla’s Better Half” was nominated for a Rhysling Award, the Science Fiction Poetry Association’s highest honor. His poetry has appeared in Star*Line, Escape Clause, The Book of Tentacles, Illumen, the 2010 Rhysling Anthology, Kaleidotrope and others. One of his pieces was also mentioned in a New York Times article on zombie poetry.

Matt currently works for CGI Federal in Columbus as a writer and coordinator.