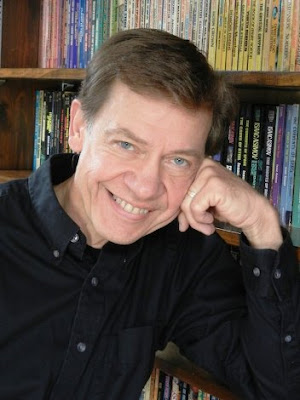 An early interest in astronomy, the comic books Strange Adventures and Mystery In Space, and the Sunday comics of Flash Gordon, led Albert Wendland to a life-long fascination with science fiction. Science projects, early efforts at art, and “creativity exercises” all had an SF vein, and the first novels he read were by Andre Norton, Poul Anderson, Arthur Clarke and Robert Heinlein.

His dream career was to do astronomy in the day and write science fiction at night, but majoring in physics at Carnegie-Mellon (as preparation for graduate work in astronomy) was not satisfying or inspiring enough, so he double-majored by adding English with the intention of eventually teaching literature and writing. In graduate school at the University of Pittsburgh, he wrote one of the first dissertations on science fiction, and his interest in both mainstream literature and popular culture brought him to the attention of Seton Hill University (a College then), which hired him. He taught there happily for many years, pursuing his interests in the contemporary novel, Romanticism, the sublime in art, the graphic novel, popular fiction, and, of course, science fiction, while getting many of his poems accepted in the school’s award-winning literary magazine, publishing articles on science fiction. Then a call for graduate programs led him to co-create the MFA in Writing Popular Fiction, which—unique in academic writing programs—focuses solely on the popular genres. This experience in developing and eventually running the program, and the ongoing communal inspiration provided by its students and faculty, encouraged a return to the thrill of writing SF novels, which he excitingly is continuing now.

Albert's debut novel, The Man Who Loved Alien Landscapes, is due out with Dog Star Books in June 2014. Contact him at AlbertWendland@gmail.com.
Posted by Heidi Ruby Miller at 4:51 AM