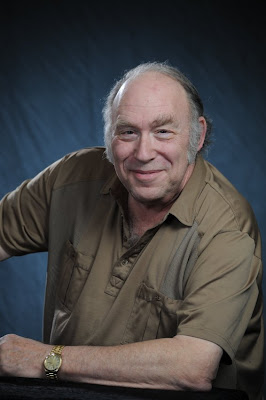 Mike Resnick
Locus, the trade journal of science fiction, keeps a list of the winners of major science fiction awards on its web page. In the short fiction category, Mike Resnick is currently the leading award winner, living or dead, in the all-time standings. When novels are added, he is fourth on the all-time list, ahead of Sir Arthur C. Clarke, Robert A. Heinlein, Isaac Asimov, Ray Bradbury, and Philip K. Dick.

Mike was born on March 5, 1942. He sold his first article in 1957, his first short story in 1959, and his first book in 1962. He attended the University of Chicago from 1959 through 1961, won 3 letters on the fencing team, and met and married Carol. Their daughter, Laura, was born in 1962, and has since become a writer herself, winning 2 awards for her romance novels and the 1993 Campbell Award for Best New Science Fiction Writer.

Mike's first novel in this "second career" was The Soul Eater, which was followed shortly by Birthright: The Book of Man, Walpurgis III, the 4-book Tales of the Galactic Midway series, The Branch, the 4-book Tales of the Velvet Comet series, and Adventures , all from Signet. His breakthrough novel was the international bestseller Santiago, published by Tor in 1986. The number of books he has had published, as both writer and editor, is staggering.

He has been a prolific writer of non-fiction as well. He wrote a 4-part series, "Forgotten Treasures", to The Magazine of Fantasy and Science Fiction, produced 59 installments of the how-to column, "Ask Bwana" for Speculations, has (with Barry Malzberg) produced 60 installments of "The Resnick/Malzberg Dialogues" to date for the SFWA Bulletin, wrote a bi-weekly column for the late, lamented GalaxyOnline.com, and will now be writing editorials and columns for Jim Baen's Universe.

Carol has always been Mike's uncredited collaborator on his science fiction, but in the past few years they have sold two movie scripts -- SANTIAGO and THE WIDOWMAKER, both based on Mike's books -- and Carol -is- listed as his collaborator on those. Readers of Mike's works are aware of his fascination with Africa, and the many uses to which he has put it in his science fiction. Mike and Carol have taken numerous safaris, visiting Kenya (4 times), Tanzania, Malawi, Zimbabwe, Egypt, Botswana, and Uganda, and have two more planned for the next four years. Mike edited the Library of African Adventure series for St. Martin's Press, and is currently editing The Resnick Library of African Adventure, and, with Carol as co-editor, The Resnick Library of Worldwide Adventure, for Alexander Books.

Read more about Mike at http://mikeresnick.com.