It's What's Inside That Counts

Something lurks inside Deena Riordan. She never once questioned her life in the criminal underworld as the star of Mr. Marsh's illegal empire and his youngest assassin. Her ruthless demeanor and dark magical powers have kept her at the top of the heap for years. But one day she pushes the sorcery too far and something snaps. Only then does Deena realize she's always been a puppet of that dark power with no true will of her own.

Now, in order to get out of the crime business for good, she needs to save her sister from Marsh's angry clutches. It won't be easy. She'll have to make her way through friends turned foes, dodge determined federal agents, and stay out of a particularly stubborn fellow hitman's sights. Worst of all, Deena will have to wrestle with the darkness inside to keep it from swallowing her up again.

Tell us about your new book!
I’m excited about Indelible Ink. At the core, it’s a story about the Riordan sisters, Deena and Harper. They both work for a crime boss named Marsh, but Deena differs from her sister in that she has a strange power that courses through her. It seems like an advantage in her line of work, until things start to deteriorate and she finds that power turning on her.

Deena decides she wants out of the criminal life, but she can’t leave without her sister. Marsh wants to make sure that doesn’t happen, so he sends all of his criminal associates to stop her.

I enjoyed writing this story and had fun drawing from many of my favorite pop culture influences.


Where did the idea for this story come from? What was the biggest influence for it?
The first two chapters were actually two separate short stories I’d written and I realized that it would be interesting to see the characters come together. The first story, about the protagonist, came from an        idea I had about magic having consequences, you know? A character can’t use their powers as much as they want without expecting to be worn out or torn down from it.

Like most of my work, Indelible Ink was influenced by a lot of different sources. It came from Elmore Leonard’s crime novels, TV shows like Alias, urban fantasy stories, Invasion of the Body Snatchers and other classic science fiction. I pull from a lot of my favorite things to get the end result in my work. You’ll find inspirations from John Woo to Scooby Doo. I honestly didn’t mean for that rhyme.


Tell us about your protagonist. Why are we going to love her?
Deena Riordan is a very conflicted individual. The life she leads is dangerous and most assuredly on the wrong side of the law, but she’s never cared. She finds out early on in the book that many of the things she believes are lies and it causes her to start making some hard decisions about her life. Very quickly, her criminal colleagues try to make those decisions for her. They won’t let her leave the business and they’re willing to go after her family to keep her power under their control.

Did I not mention the dark power that lurks just beneath Deena’s skin? It gives her some amazing abilities, but it also takes things away from her and pushes her. The internal struggle breaks something in Deena as she tries to come to terms with what she is.


Who's your favorite character in this book and why?
I’m always partial to my villains. I like the crime boss, Mr. Marsh quite a bit. His henchmen are pretty fun too, especially Morgan. It’s exciting to see how far I can bend and twist them, and how ugly they can get. You don’t want them to be cartoons or stereotypes, but they need to have their own personalities that make them different than the criminals you’re used to.


What attracted you to science fiction, and how do you approach blending it with other genres?
I’ve always loved science fiction. The first movie I remember seeing in the theater was Star Wars, and it really had an effect on me. I’m sure that movie led me to pursue all the comic books and movies and television that I consumed in the following years. Every work of fiction kind of draws from the question “What If?”, but I think it’s more important in science fiction, really. Asking that question and starting there when I write, is half the fun for me.


What do you want to get across in your writing, if anything?
Whether in movies, books or television, I’ve always loved action and adventure stories. It’s so much fun to get lost in someone else’s world for a while. I feel if readers enjoy their time in the place I’ve created, then I’m happy. In this book, I hit on the themes of family and responsibility.


What are your future writing plans?
I’m working on a sequel to my first book, Odd Men Out. It’s really been fun to write so far. After that, most likely is the follow-up to Indelible Ink. There’s also a secret stealth project that’s in the editing stages right now. It’s been a whole lot of fun to create, so hopefully that works out. After that, I don’t have any definite plans. I have an idea for a military sci-fi novel, and a couple of others, but I really just want to see what I’m in the mood for once I’ve finished those sequels. I’m pretty open.


Leave us with a favorite quote or excerpt.
Deena attempts to change her criminal ways, but it isn’t easy. Here’s a quick excerpt where she mulls that idea over while ‘accidentally’ stealing a car from a fitness instructor named Denise.


Denise was a bitch, wasn’t she? Deena thought. She reasoned that she could return the car when she was done, if she had to. What was a few hundred or thousand miles more on the odometer anyway, right? It wasn’t like she was killing Denise. That’s what she would have done in the old days. Was there a distinction between her old life of crime and casual use of her Shadow Energy?

Deena closed the trunk, got in and, rather than flooring it, quietly drove out of the lot and onto the road. She let the exercise lady’s GPS device guide her to the nearest road that paralleled a major highway and took off at a sensible speed. She reached into her bag for the phone to try to keep in touch with her sister and was pleasantly surprised to find a sleeve of crackers and some slices of cheese wrapped up in a paper towel. She was not as excited when she remembered those were stolen as well.

She crunched a cracker and let the crumbs fall all over Denise’s seat and floor.

Pre-order INDELIBLE INK, and join Matt and other Dog Star authors at the In Your Write Mind book signing on Friday, June 26th at 7:00 PM. 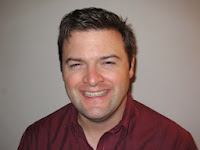 Matt Betts was born in Lima, Ohio, some years ago. Lima is just a stone’s throw away from several other towns with excellent throwing stones. During and after college, Matt worked for a number of years in radio as an on-air personality, anchor and reporter. His fiction and poetry have appeared in various magazines, journals and anthologies.


Matt currently lives in Columbus, Ohio, with his wife and sons. He is hard at work on his next book. And watching old science fiction and horror movies. Mostly writing. And maybe reading comic books. Look, he’s writing, OK? Jeez.


Find out more about Matt at his website, www.mattbetts.com. He tweets @Betts_Matt.
Posted by C.G. at 8:34 AM